Dr Niraj (Nij) Lal is a science presenter, energy researcher, and children's author based in Melbourne, Australia. His interests are in renewable energy, transparent governance, and science communication, and his current roles include being a principal at the Australian Energy Market Operator, presenter of ABC SCIENCEY, Physics Consultant to the ARC Centre of Excellence for Exciton Science, Visiting Fellow at the Centre for Sustainable Energy Systems at the Australian National University, and Director of First Principles. In 2012 Niraj ('nir-ridge' or Nij for short) graduated as a Gates Scholar with a PhD in physics from the Cavendish Laboratory, University of Cambridge, and in 2016 he was named one of the ABC's Top 5 Scientists Under 40. In 2017 Nij got his first gig on ABC TV with Todd Sampson's Life on the Line Series, followed by hosting ABC Sciencey on iView, and presenting ABC Catalyst in 2020. He speaks regularly about science on telly and radio, and has taught science at levels ranging from pre-school to post-graduate. Prior to his PhD, Niraj worked as a bicycle courier in Perth and a travelling science presenter to primary school kids across regional WA with Scitech. Niraj graduated with a BSc in physics from the Distinguished Scholar Program at the ANU in 2007, winning the Angus Nicholson Honours Scholarship for passion and excellence in Science. His children's book written two Henry the Flying Emu was published by Little Steps in 2020 and is available in all good book stores. Niraj is the Founder and CEO of TheKnews.org - a global wisdom-sharing website, noisevssignal.org for digital protest against mass surveillance, Raio de Sol Community Samba Band, and Hungry Science Beast for Radio. His public engagements are usually conducted through Claxton Speakers. More info can be seen at his website here

Curriculum Vitae
A copy of my formal CV can be downloaded here.

Research
My research is best summed up on my research page. 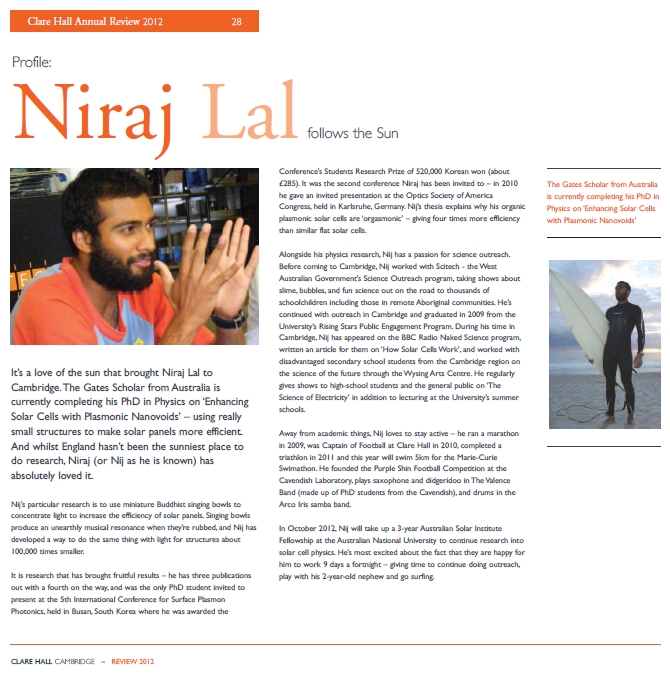 Niraj Lal [2008], or Nij as he is known, practises what he preaches. Since arriving at the University of Cambridge on a Gates scholarship, he has been involved in a whole range of outreach work with children and adults, explaining the work he does researching solar cells and panels.

He adds: “I think one of the biggest challenges of our generation is to understand our planet's resources and develop ways to live with them sustainably. I'm enjoying researching a means of electricity generation that can be safe, clean and decentralised, but if we don’t explain what we are doing we won’t bring the public along with us.”

Nij has been working with the University’s Community Affairs team on their Rising Stars public engagement programme. In January 2010 he took part in a public event to promote Rising Stars in which four researchers had to talk for a minute about their work to a 120-strong audience who knew nothing about their specialist field. The audience then voted on who they wanted to hear more from and Nij won.

He has worked with disadvantaged secondary school students from the Cambridge region on the science of the future through the Wysing Arts Centre and regularly gives talks to high-school students and the general public on “The Science of Electricity” last year. Through his interest in outreach work, Nij, who is studying for a PhD in Physics at the Nanophotonics Centre and is at Clare Hall, has also appeared on the Naked Scientists, who run an award-winning radio show on the BBC. He wrote an article for them on "how solar cells work" and plans to continue helping with the show on solar energy.

Nij is no novice at public outreach work. In his home country of Australia he has worked with Scitech, the West Australian Government’s Science Outreach programme, taking shows about slime, bubbles and fun science out on the road to hundreds of schoolchildren, including those in remote aboriginal communities. “It was an incredible opportunity to see parts of Australia that you normally need permission to enter,” he says.

He has balanced this work with his ongoing research and in the summer scooped a big prize at a conference in South Korea. He was the only PhD student invited to present at the 5th International Conference for Surface Plasmon Photonics, held in Busan, South Korea and was awarded the Conference's Students Research Prize of 520,000 Korean Won (about £285). It was the second conference Niraj has been invited to - in 2010 he gave an invited presentation at the Optics Society of America Congress, held in Karlsruhe, Germany. Nij's presentation was titled "Enhancing solar cells with localised plasmons in nanovoids" - describing why his organic plasmonic solar are 'orgasmonic' - giving four times more efficiency than similar flat solar cells. The results were recently published in the Optics Society of America journal Optics Express.

Nij was born in Hawaii where his father, an academic who specialises in the history of the Pacific, and his mother, a PhD student at the time, were based. At the age of seven, he moved to Canberra. In Year 12, he was voted school captain and first started to public speaking skills. He was in the school's jazz band, first XI soccer and cricket teams, and was a soccer referee at the national level. He left to study politics, philosophy, maths and physics at the University of Melbourne and then transferred to a similar course at the Australian National University in Canberra in his second year. By the third year, he was keen to take a break: “I felt I was doing university because that was one of the done things to do. I wanted time to think about what was important,” he says.

He travelled across Australia and worked at various jobs – on long-line tuna fishing boats, at a cattle farm, as a bus driver and on a diving boat – and hitchhiked around the country. “After that I went back to university with a renewed interest in physics and maths,” he says, although he maintained his interest in politics through activism in the Australian Labour Party. He is a current member of the Australian Greens Party.

Nij was offered two scholarships for his honours year, one worth $10,000 to study theoretical physics, and one worth $5,000 to study solar cell physics. Nij chose solar cell physics and graduated in 2007 from the university's Distinguished Scholar Programme as the Angus Nicholson Scholar in Science - awarded for passion and excellence in science. At the end of his course Nij applied to several universities, including Cambridge, to do his PhD. Cambridge had several advantages – firstly, that there were people working at the University on NanoPhotonics and solar panels, which was the area that interested him most.

Another plus was that his father had spent six months doing research at the University and Nij had previously visited on a football tour so it was a place he had some knowledge of. He wanted to do his research on something which would have an impact on policy. “So much of physics isn't very practical,” he says. His family has a big interest in environmental issues, with his mum being the first to become involved – she works at the International Union for Conservation of Nature. His sister, who is six years older than him, works in the Australian Government Department for the Environment conserving biodiversity in Western Australia.

After choosing Cambridge, Nij applied for an Overseas Research Studentship and a Cambridge Australia Trust Scholarship. He didn’t know what a Gates scholarship was, but ticked the box on the application form, nevertheless. He was first told that he had been accepted for an ORS and then later that he had got a Gates scholarship. The year before he started at Cambridge, he travelled to Western Australia with his girlfriend, where he worked as a cycle messenger and for Scitech and surfed at Scarborough Beach. He deferred his arrival at Cambridge from October 2008 to January 2009 to travel with his girlfriend. His research at Cambridge is on nanovoid plasmonic enhanced low-cost photovoltaics - in layman’s terms he is focusing on making solar cells more efficient using really small structures. This will enable them to be cheaper as well as delivering more electricity for the same amount of sunlight.

When he finishes his PhD, Nij is keen to travel on his bike and surf. One organisation he is really interested in working with is Bushlight, which currently takes solar panels to remote aboriginal communities in Northern Australia in a practical, robust and culturally sensitive way.

Whilst in Cambridge, Nij ran a marathon in 2009, captained his college football team in 2010, and competed in a triathlon in 2011. He plays saxophone and didgeridoo in The Valence Band and drums in the Arco Iris samba band. He hopes one day to return to Australia to continue his research into solar cell physics.


Donating 3% of my income to charity since the age of 24, volunteering with the Rivers Brigade of the ACT Rural Fire Service, starting the Cavendish Purple Shin Football Competition, being a senior first aider, reviving the Canberra Critical Mass Bike Rides, donating twice the amount of blood currently in my body to the Red Cross since 2001, and founding the Raio de Sol Canberra Community Samba Band.